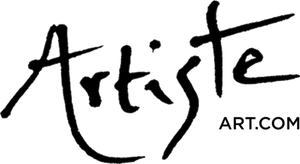 Santa Barbara based artist James-Paul Brown, blends the broad brushwork and vibrant colors of Van Gogh with the ethereal strokes and pastel shades of Monet to produce enchanting, passionate masterpieces. A world-renowned painter his life resembles a colorful palette, capturing the beauty and adventure of the human experience. His broad range of subjects include Hollywood celebrities, famed athletes, and world leaders, as well as favorite cities, landscapes and vineyards.

Admired by art-appreciators around the world, his works continue to be discovered. His love for sports has resulted in paintings and sculptures for the 1984 and 1996 Olympics, the Las Vegas International Marathon and the International Swimming Hall of Fame. In the late 80s, he was chosen to capture the courageous beauty of the Americas Cup.

James-Paul Brown's main inspiration for the past eleven years has been his beautiful wife Juliette. “Since I met her I have needed to capture her in every moment,” says James-Paul, who has painted Julie as a mermaid, a firefly, an angel, and even Ophelia. “I think love makes the brush flow more easily,” he adds.  As a bon vivant and wine expert, his passion has led him to create wine labels for Artiste.

James-Paul Brown’s captivating paintings of wildly expressionistic landscapes, exotic seaports, musical and theatrical extravaganzas, flowers, and people – dancers, athletes, musicians, and movie stars – are a direct extension of his personal delight with life and his exuberant nature.
A colorist, Brown continues and expands the exploration of light and bright colors through his vivid suites of images, especially his energetic landscapes – charming country lanes, fields of wildflowers, sun-splashed rolling hills – transforming each idyllic scene into a rich panoply of visions and emotions. Brown’s joyous and playful works are a visual translation of his passionate feelings, not only for art, but for the world at large. An inexhaustible love of creativity is contained in each of these paintings – James-Paul paints for the sheer pleasure of it, and delights in sharing his enthusiasm with others.
Michael Zakian, Director of the Frederick Weisman Museum of Art at Pepperdine University observed, “James-Paul is a sensitive and caring recorder of intimate sights and events. His best paintings are lyric. As in lyric poetry, the art results from a rapid outpouring of intense personal feeling. For Brown, there is little concern for established forms or traditions. Intuition and spontaneity rule. Yet these paintings offer more than just uncontrolled passion. The artist’s concern for beauty, propriety, and the integrity of all things gives his art a certain balance and restraint.”
The people that attract him as subjects for his art are those who have extended themselves beyond the ordinary into the realm of celebrity and near-myth. James Reed, Curator of the Riverside Art Museum wrote, “Brown takes today’s heroes from the worlds of entertainment and sports and transposes each likeness to canvas and paper with vibrant energy. He fuses the powerful dappled brush strokes of the Impressionists and the unique color field of the Fauves with contemporary iconography, setting these invigorating figures in an environment that borders on psychedelic frenzy.”
Brown’s attitude toward life is romantic, and it is not surprising he has created a large number of paintings inspired by his beautiful wife, Juliet. An actress and PhD candidate in psychology, she appears throughout his work in various guises – as a mermaid, as Ophelia, as an ethereal sprite, or simply as herself, sunning beside a pool. She is his muse, and in those paintings featuring her, the subject is without question Eros.
James-Paul Brown has had a remarkable career. In 1980, his first art exhibit at the West Beach Café in Venice, California sold out. Soon thereafter, the entire run of a limited edition lithograph of his painting Artist’s Table also sold out. At this point, following a relationship with the Los Angeles Ballet, his career took off. In 1982. CBS Sports hired him to capture the World Games in Canada and the 1983 Pan-American Games in Venezuela. For the 1984 Olympics in Los Angeles, he joined David Hockney and Leroy Neiman as official artists of the Games. The 1996 Olympics in Atlanta inspired 20 paintings and three bronze sculptures. His stirring colors and hyper-kinetic forms are ideal for capturing thrilling moments of major sporting events – Super Bowl XXX, Wimbledon 1985 (for NBC), the 1988 America’s Cup, Kentucky Derby, the Las Vegas Marathon, and the Swimming Hall of Fame, to name a few.
James-Paul has also done exceptional pictorial work for the Ballanchine Ballet Company, the New York Philharmonic, the Bolshoi Ballet, and the Cannes Film Festival. He was commissioned by the U.S. State Department to paint a portrait of Pope John Paul II during the Pope’s visit to the U.S. He has also painted inaugural event portraits of Presidents Reagan, Bush, and Clinton.
Brown’s art appears in numerous private and public collections in the U.S. and abroad, including the collections of Clint Eastwood, Robert Altman, Joan Kroc, Mrs. Anwar Sadat, Elton John, and Hank Aaron. For many years, James-Paul has donated works to charitable causes, such as the Children’s Hospital and Cedars Sinai Hospital in Los Angeles, the American Cancer Society, and Easter Seals. As a wine connoisseur, James-Paul’s art has graced over 50 wine labels for Creston and Sunstone Vineyards, both of California. He has also released his own wine, “Artiste.”
James-Paul Brown’s art reflects a positive, upbeat attitude toward life. The romantic and irresistible charm of his paintings will surely life the spirits of all who encounter them.